The No-Needle, No-Scalpel Vasectomy is also known as a Gentle Touch Vasectomy. It is a simple, safe, and effective form of permanent birth control for men. It is a gentle, office-based procedure that takes 10-20 minutes to complete.

A vasectomy works by blocking the tubes (vas deferens) that carry sperm from the testicles. This prevents sperm from entering the semen.

With the Gentle Touch Vasectomy technique, the skin and underlying tissue are anesthetized with a spray applicator. A single, small puncture is made in the scrotum under the penis. Through this tiny skin opening, we access the vas tubes. The vas is then divided, and the abdominal end is sealed off with a heat cautery.  We use a small titanium clip or silk tie to bury the abdominal end of the vas in the surrounding fascia. This is known as fascial interposition. The testicular end is left open allowing the sperm to leak out and be recycled.

At the end of the procedure, the vas falls into its anatomical position. No sutures are required to close the skin.

You can go home directly after the procedure.

Vasectomy is for life. After a vasectomy, a man will no longer be able to get a woman pregnant. If a man is unsure about not wanting more children some day or doesn’t know, vasectomy might not be a good choice for him. A surgical procedure does exist to reverse vasectomy; but this operation, “vasectomy reversal,” is expensive and does not always work. On average, only half of couples that try having children after reversal do have a child. We do not do reversals. For information about this, we can refer you to a urologist who does reversals.

Vasectomy is a very safe, low-risk procedure, but with any surgery, some complications can occur. Mild bruising is the most common reaction. We recommend wearing tight underpants or a jock strap for the first week after the vasectomy to decrease your chances of bleeding or swelling.
Other rare complications include; infection (very rare and can be treated with antibiotics), a painful bump on the vas (sperm granuloma), and bleeding into the scrotum causing a collection of blood (scrotal hematoma). Several weeks after the procedure some men experience pain in the testicles that usually only lasts a few days (about 5%). This resolved with oral anti-inflammatory medications, like Advil or Motrin. Chronic pain is very rare (about 0.1-1%).
Although unlikely, the continuing ability to get someone pregnant is also a risk of vasectomy.

• Not 100% reversible.
• Must use other forms of birth control until sperm-free.
• Does not prevent transmission of sexually transmitted infections (STI's).

Alberta health covers the basic vasectomy costs. We prefer to use the Gentle Touch Vasectomy technique that requires specialized equipment to deliver the local anesthesia. Combining the No-Needle technique with the No-Scalpel technique makes the procedure virtually pain-free. This combined technique also has the lowest complication rate.

We have a charge of $100 to do the Gentle Touch Vasectomy, and we will give you all the supplies you need for aftercare.

What is the difference between the No-Scalpel and the Classic vasectomy?

No-scalpel vasectomy does not use a scalpel. It uses special small tools to reach the vas tubes by making a tiny opening in the scrotum without cutting. Because this opening is so small, stitches are not needed. This is different from the “classic” vasectomy that makes two larger openings on the scrotum and sometimes needs stitches. The chance of complications (infection and bleeding) is less with the “no scalpel” technique. Recovery is faster. The no-scalpel vasectomy is as effective as classic vasectomy for birth control.

No-needle and no-scalpel vasectomy techniques are the most advanced medical methods available.

How well does it work?

Vasectomy is extremely effective (it fails less than 1 time in 2000). But, it can take up to 3 months for it to start working. The semen needs to be checked after the surgery to make sure there is no more sperm in it. Until then, another method of birth control must be used, or pregnancy can occur. Most men have no more sperm in their semen the first time it is tested. Sometimes it takes more than one test before it is clear of sperm.

Does vasectomy change your sex drive?

For most men, not at all.  If any change does occur, more men note an INCREASED sex drive after vasectomy.

Vasectomy does not affect the male hormones produced by the testicles.  After vasectomy, sexual function does not change.  Sensation, erection, and ejaculation are the same except the ejaculate no longer contains sperm.

Will I be able to notice any change in my semen?

No.  The amount of sperm in semen is so small that men do not notice any change.  More than 95% of the semen in made in the glands above the vas tubes, the prostate and seminal vesicles, with only a small portion of the total volume being made in the testes. After a vasectomy the only way to tell the difference in the semen is with a microscopic semen analysis.

What happens to the sperm after a vasectomy?

Why do I have to wait 3 months to get my semen checked?

You should not consider yourself “clear” until a semen check verifies that your semen no longer contains viable sperm.  The semen check is an important part of vasectomy, but bringing the sample in too soon can give you a scare.  Sperm can hide in the prostate and seminal vesicles for 2-3 months, so early on a sperm count could be positive even though the vas tubes were successfully sealed.  Waiting allows the hidden sperm to be flushed out. There is a very rare chance that the tubes can grow back together after a vasectomy. After three months, the semen analysis should show if this occurred. The sample can be collected in the comfort of your home.  For most men, the semen check is a simple, last step in the process to ensure a successful vasectomy.

How does the no-needle anaesthesia work?

We use a device called the MedaJet. It is a high-pressure device that sprays the local anaesthetic through the skin without making a puncture wound. 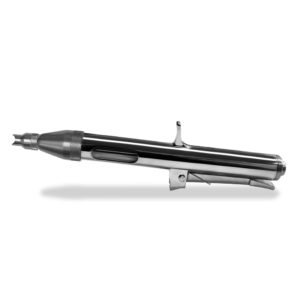 Special Message for Young Men with Fewer than Two Children

If you are less than 30 years old and you have had fewer than 2 children, please consider the following points before having a vasectomy: